Princeton will face Minnesota in the NCAA tournament this weekend. Here’s an interactive timeline of the Tigers’ schedule this year including some key wins and moments.

Here is an interactive tale of the tape comparing Princeton and Minnesota ahead of the NCAA tournament quarterfinals. Rolling over the image will activate interactive bullet points that you can hover over to reveal information. 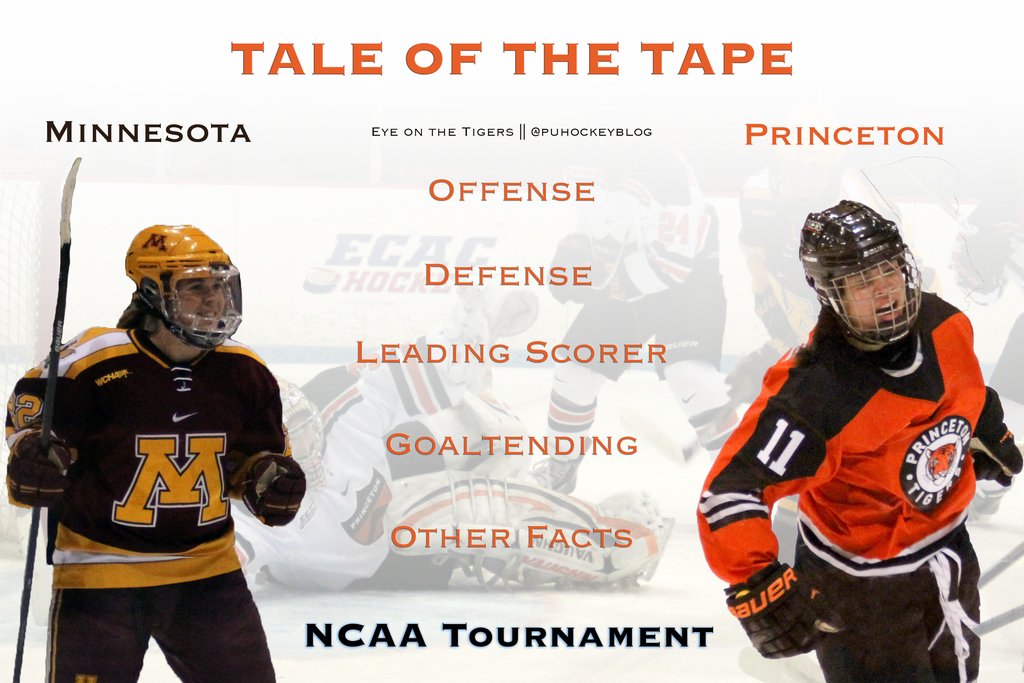 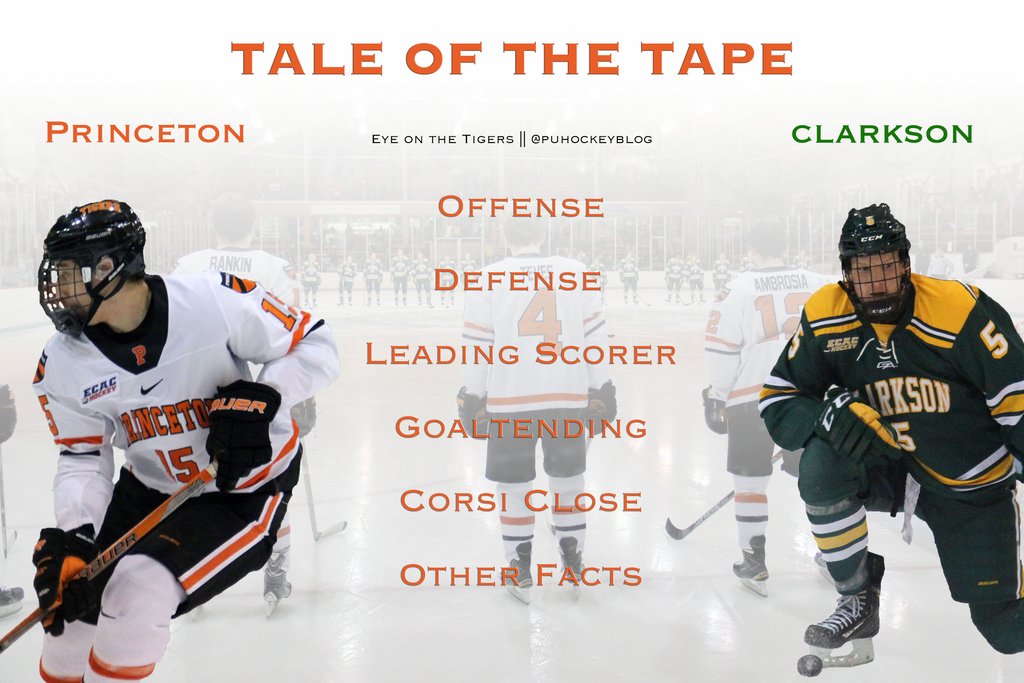 On Feb. 20 at RPI, Colton Phinney was watching the scoreboard and tracking his saves. He knew he needed 18 stops to break the program record for saves in a single season. It took a period and a half, but he finally stopped puck No. 871 to move in first place.

“Obviously it’s pretty cool to be on the good side of the record,” Phinney said. “It’s a really long history of the program and a lot of years and a lot of players, but I think I’d rather have it be a different record than saves. I’d rather it be wins or shutouts or save percentage, because you can have a lot of saves and not be winning.

“I’d rather have it be those, but obviously it’s still pretty cool.”

But just one week before, Phinney missed Princeton’s contest at St. Lawrence. Instead of sitting on the bench, he was sitting in the stands as a scratch.

The starter had been dealing with a nagging injury sustained at Harvard on Jan. 29. He continued playing for the next few weeks, making 115 saves over the next four games.

“I didn’t practice much but I’ve been practicing,” Phinney said. “Maybe the week after I got hurt, I practiced maybe one time And then slowly I practiced more and then now I’ve been fully practicing again.”

But after five games of Phinney playing in pain, including a contest at Clarkson, Princeton decided it was time to shut him down.

Phinney knew there was a possibility that he wouldn’t play sometime during the trip to North Country, but it wasn’t until Saturday morning he knew for certain. The game that Phinney missed, a loss to St. Lawrence, marked the first time in his collegiate career that Phinney wasn’t dressed.

“It was tough and I wasn’t thrilled, but I think I agreed with it and thought it was probably best for me and for the rest of the season,” Phinney said. “But I wasn’t thrilled. I wanted to play. And obviously watching the game was pretty tough and being in the stands was obviously a little different for me. But, I agreed with it. I didn’t love it but it was something that had to be done.”

After missing the game and taking a few days off from skating, Phinney started practicing again on Feb. 16. By then, he had a feeling he would be back in the lineup that weekend.

“I guess the idea was when we talked Saturday that I was going to playing, that’s why I was going to take that game off, because it would be best for me to try and get a full recovery,” Phinney said.

“He was excellent,” Princeton coach Ron Fogarty said after the loss. “He looked more flexible and I think the day of rest, we should probably [have done] it sooner. He was a little banged up. But he looked great tonight. He had a solid game.”

“I didn’t feel good before the game. so I think it had some effect,” Phinney said. “I think was more mental of just realizing how terrible it is to have to watch, but I think it definitely helped because I felt better all week and I feel better now. I think that day [off] was huge. It gave me an extra day and then I also had Sunday and Monday off too.”

On Saturday night, Princeton hockey co-captain Mike Ambrosia will skate against Cornell for the last time. Throughout his Princeton career, Ambrosia has played against the Big Red eight times – missing just one contest. The forward is 2-6 against the Ivy League rivals, winning his first two Cornell games.

By the time the lights dim on Baker after Saturday night, Ambrosia will have skated in his ninth and possibly final game against the Big Red. It seems like just another important, regular-season game with potential home ice on the line. And it’s just that for Ambrosia, another game.

But for his family, it’s much more.

Because when Ambrosia learned to skate as soon as he could walk, it was his dad – a Cornell hockey alumnus – teaching him.

“I definitely grew up a Cornell fan,” Ambrosia said.

Ambrosia’s dad played for Cornell during 1975-78, the same time Ambrosia’s mother – Lynn – played for Cornell lacrosse. David Ambrosia, also a forward, dressed in 85 games for the Big Red and scored 129 points. He netted a career high 24 goals and 59 points during the 1976-77 season and served as the team captain the next season.

“There’s definitely some Cornell shirts and sweatshirts laying around the house and everything …. [I grew up] listening to my dad’s stories and my mom’s stories about their college experience,” Ambrosia said. “They really loved it.”

When he was younger, Ambrosia heard stories from his parents depicting a packed Lynah Rink from 40 years ago, where fans would throw fish onto the ice.

“I know they still do the newspaper thing where they’re announcing our names [and] they shake the newspapers like they’re ignoring the commentator,” Ambrosia said. “But I think back in the day the rules were probably a little more lenient and I think they used throw fish on the ice.

“We don’t get to see that anymore, but I’ve definitely heard some stories from my parents and my parents’ friends that they used to enjoy that tradition.”

While Ambrosia hasn’t seen the tradition of throwing fish, he has been visiting Lynah Rink for years.

“We used to go up every so often,” Ambrosia said. “It’s definitely a great place to play. Their fans are really into it and it’s a great atmosphere and as a team we always like going there and trying to get some points.”

Cornell was such a big part of Ambrosia’s life that he once considered becoming a Big Red, like his older brother Dan.

“It was definitely an option and something I considered, but my parents both told me at a very young age that I could go wherever I wanted and wherever I felt comfortable,” Ambrosia said. “Princeton quickly became that school, and I’m very happy for the decision that I made.”

When Ambrosia arrived at Princeton in 2012, it was slightly strange that he was the only member of his family who wasn’t a Cornelian.

“In the beginning it seemed odd, but obviously four years later so it’s just normal and they’ve become Princeton fans.”

The Chatham, N.J., native’s parents attend home games and travel to many away games. While Baker Rink has become a new home for the Ambrosias, it’s helped keep the family close to their Cornell roots.

“That first game that I ever played at Lynah Rink when I was a freshman that was definitely a special game. … But I think you know as the four years progress, it’s a normal game,” Ambrosia said.

But it’s still a big deal for Ambrosia’s family.

“My family and my extended family, they probably circle those two games on the schedule right when it comes out,” Ambrosia said. “They enjoy going back to their alma mater and a lot of them are still in the area, my extended family, so they enjoy coming down to Hobey Baker and going out to dinner afterward. It’s nice to get some family together around those games whether it’s in Ithica or here in Princeton.”

Here’s an interactive of Colton Phinney’s saves and goals allowed against RPI and Union on Jan, 7 and Jan. 8. You can sort the shots by results, type, team and period.

So far this season, Princeton’s offense is averaging more than last year. The Tigers score 2.31 goals per game, as opposed to 1.30 goals per game, which ranked last in the country that year. There are several factors behind the increased output, including more familiarity with the team’s systems. I took seven of the shot charts from the first half (I’m missing all the road games except for Penn State) and compiled a shot chart where Princeton’s goals were scored from.

Here’s an interactive line chart breaking down their scoring patterns on a game-by-game basis last season: Princeton men’s hockey lost some of its scoring due to graduation, but the Tigers are returning its top three scorers from last season. Jonathan Liau led the team with 14 points (4g, 10a). Rankin and Foster were each tied with 10 points, while Foster added four goals.

Here’s an interactive line chart comparing each player’s scoring on a game-by-game basis. Entering the 2014-15 season, Colton Phinney had appeared in 18 games, splitting playing time with senior Sean Bonar. This season, Phinney earned the starting role – appearing in 30 games, all but one. Earlier this year, Eye on the Tigers looked at the difference in Phinney’s stats midway through the season. While stats only tell part of the story, I was interested in seeing the effect starting consistently had on Phinney’s numbers.

I’m not suggesting save percentage and goals-against average stats are the best or only way determine how good a goalie is. I usually disregard GAA, since it’s more of a team stat. A save percentage isn’t the greatest way either, but it’s the best stat we have to measure goaltenders. This is also a very small sample size, so it’s tough to draw concrete conclusions. But it appears as though consistency in starts, as well as having a stable system in place, has helped Phinney’s numbers.

As a freshman, Phinney’s save percentage was .901. He appeared in 18 games and started 17, splitting his starts with senior Sean Bonar. There were several instances where Phinney started back-to-back games, including three weekends where he played both nights.

In his sophomore season, Phinney was the starter. His save percentage increased to .910 through the 29 games he played. Phinney also started 28 contests.

The first chart below looks at how Phinney’s game save percentage changed. It’s a small sample size so it’s hard to draw a conclusion on whether the consistency in starts helped Phinney’s save percentage, but it did vary a lot less his sophomore year – the dips weren’t as extreme as the season went on.

This next graph looks at his game goals-against average, which is more of a team stat. It’s basically an inverted look at the first graph, showing us the spikes where Phinney’s save percentage dipped. Looking at the first two charts you can see that Phinney’s numbers are more consistent, especially later on in the season. It’s worth noting the team as a whole became more consistent later, once they became comfortable with the new systems.

You can see that Phinney’s save percentage as a whole is higher his sophomore year than his freshman year. With more consistent numbers,