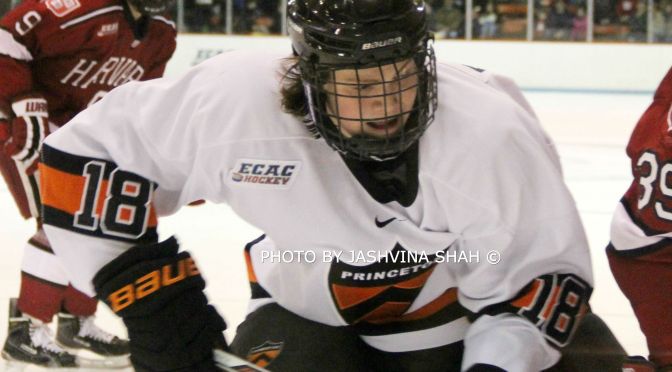 When Eric Robinson was little, he’d watch his older brother Buddy play hockey. Eric always wanted to skate with him.

“He was really impressionable too, so anything I did as a younger brother I think he wanted to do it as well,” Buddy said. “If I’m out there skating, he wants to be out there too. So he started younger than even I did.”

“He always wanted to fit in with me and with my friends growing up,” Buddy said. “So he worked that much harder. He’s grown up now and e’s always been one of the best skaters on his team if not the best.

“He’s not happy unless he’s perfect and he’ll do everything he can to make sure he is perfect.”

After putting on roller blades for the first time, Eric continued working on his skating. Now it’s one of his most noticeable characteristics in his first season with the Dubuque Fighting Saints of the USHL.

“He’s a fantastic skater, he’s got NHL skating ability, long powerful strides,” Shaw said. ”Skating is a dominant part of his game. He thinks the game very well, he does everything very well.

“But the skating and his size, he’s a big guy, really stands out and really gets your attention when you see him skate.”

Eric, who is committed to Princeton for 2014, measures 6-foot-1 and 180 pounds. Shaw said he thinks he still has room to grow and add more weight, and has the potential to be an NHL player.

“It’s always going to be how his college time goes. But you look at a guy like this and you do think there’s some NHL potential there because he’s got size and speed,” Shaw said.

“He’s adjusted very well this year. I think his freshman year of college, that’s when things might start clicking for him.”

Fighting With the Saints

At the beginning of the season, Eric Robinson and the Fighting Saints traveled to Russia for the Junior Club World Cup.

It was the first time Shaw saw Eric play.

“I just thought he was an eager guy looking to get better everyday, doing whatever it took to be a good teammate,” Shaw said. “He performed very well in Russia and helped us win the bronze medal.”

When Robinson returned to the U.S., he didn’t play in every game. Some nights he sat as a healthy scratch, something players normally face in their first seasons in the USHL.

“There’s a learning curve,” Shaw said. “Normally most of these players that come into this league have been the best players on their team. They’re not used to not playing a ton of minutes all the time.”

“But you have to learn why you’re not in the lineup every night and fix that,” Shaw said.

Robinson responded by observing on the nights he sat out and working to get better.

“A good team guy is disappointed but he doesn’t wear it on his sleeve, he has respect that his teammates can go out and get the job done. And I think he’s handled it that way,” Shaw said.

After being drafted by Dubuque in the third round of the 2013 draft, Robinson has had to adjust to the USHL’s speed and

“The difference between the USHL and U18 Triple-A is just tremendous,” Robinson said. “It’s been a lot faster and I’m still adjusting now and [I’ve] been getting better everyday. That’s my goal.”

Shaw said Robinson has acclimated to the small-ice game, managed the puck better and paying attention to timing.

“Players coming up to this level are always impressed by the level and it’s humbling and you have to work very hard to have success. He’s done that.”

Shaw asked Robinson and some of his team to work on playing pucks off the boards, but Shaw said he doesn’t have to spend too much time coaching Eric.

“He hears you and he executes,” Shaw said.

For Robinson, who’s from Bellmawr, N.J., the best thing about hockey was the relationships he formed with his teammates.

“He stands up for teammates, he’s always around teammates,” Shaw said. “He’s always sitting in the huddle, he’s always in it with the group, he wants to be in the locker room. Every time he walks into the rink he’s at home, he feels very comfortable.

The Fighting Saints, the defending Clark Cup champions, are currently third in the Eastern Conference with 64 points this season.

“It’s been awesome here,” Robinson said. “We’ve been together for a while now and we’ve had great relationships here.”

“The players that live out east and travel to the Midwest, an area they’ve never been, knowing it’s the best league and the best opportunity to challenge themselves, shows a lot of passion right there,” Shaw said.

Before Eric officially made a decision on college hockey, his older brother Buddy was playing at Lake Superior State. Eric, busy with his own hockey, still managed to see his older brother skate for the Lakers a few times.

Eric said he always wanted to play college hockey, but watching his brother skate for LSSU helped. At the time, Eric was going to other Division I games, observing the atmosphere.

“I think that really motivated him to work that much harder and get where he wanted to be, which is what he got with Princeton,” Buddy said.

While Eric played with Team Comcast before heading to Dubuque, the Princeton coaching staff saw him play. Robinson visited the school in 2012 and decided to commit.

“I was always interested in good grades and getting a good education,” Eric said. “Obviously the fact that they have Division I hockey just made it a no-brainer for me and my parents.

“When they offered, I thought it was an easy yes.”

Robinson is one of four forwards slated to attend Princeton next fall.

“He deserves every bit of this and I can’t wait to see how he does at his four years at Princeton because I’m really excited to see him start playing,” Buddy said. “He deserves it and he’s worked hard for it and I’m really happy for him.”

Buddy has always been there for Eric, giving him advice or helping him regain his confidence.

But Buddy said the hardest thing Eric has gone through is making a separate identity.

“I got a Division I scholarship to play hockey, so everyone asked him about that. I’m a tall guy, [so] everyone always asks him, ‘ When are you going to grow?'”

If anything, it motivated Eric to work harder.

“He was feisty,” Buddy said. “Being an older brother, we’d go at it a little bit and he was never afraid to fight back. He was a tough kid and I want to say he’s a tough kid now.”

There are similarities between Eric and Buddy, who’s three years older.

“As a hockey player well he’s a lot better than I was at that age, I can tell you that,” Buddy said.

“He’s done a great job dealing with that, and if anything it motivated him a little bit to become and want to be that much better,” Buddy said. “I think coming out from a shadow and excelling in all parts of his life at anything great.”

Buddy, in his first full year with the Binghamton Senators of the AHL, is starting to show his potential.

Eric has that potential too.

“I think it’s there for him. I do think that he has the ability to do it if he really believes that that’s a true opportunity,” Shaw said.

“He does have some natural assets that will give him an opportunity to be in the conversation,” Shaw said.

“I think in time he can recognize that he has that, and that’s where I think the determination will come from.

“I don’t know if he’s thinking about it right now because it probably feels like a distant dream for him, but it could happen quicker than he thinks.”

When Eric pulls on the orange and black, it’ll be a long ways since his older brother used to shoot pucks at him.

“We always made him play goalie too when he was younger, which I think was standard for the younger brother,” Buddy said. “So good thing he didn’t turn out to be a goalie though, right?”

2 thoughts on “From Roller Blades to Skates: Eric Robinson Brings Motivation, Size and Speed to Dubuque”